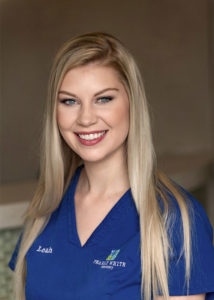 Leah Davis is a licensed dental hygienist who joined Pearly White Dentistry in November 2015. She received her dental hygiene license from the University of Alabama at Birmingham. Leah is a native of Hueytown and married her husband, Morgan, in October 2016. She loves cooking, reading books, and playing with her dog, Jack. 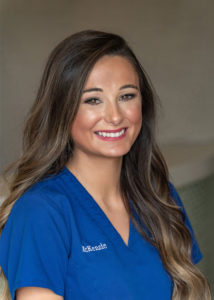 McKenzie McClain is a certified dental assistant who joined Pearly White Dentistry in January 2019. She attended Auburn University Dental Assisting Program where she received her dental assisting certificate. McKenzie enjoys spending time with her family, attending Church of the Highlands, and playing with her new puppy, Halo! 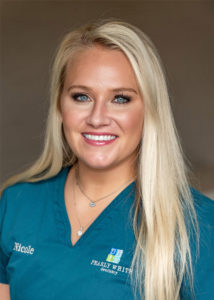 Nicole Stidham is a licensed dental hygienist who greets every patient with a friendly smile and bubbly personality. Nicole has experience treating patients of all ages, including children. She joined Pearly White Dentistry in January 2012. Nicole is originally from Potsdam, New York and received her diploma and certification from Broome Community College in Binghamton, New York. She enjoys spending time with her family, her three dogs, and her husband. 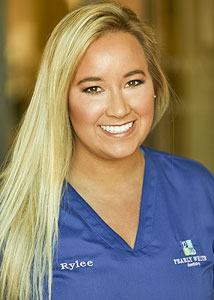 Rylee is the smiling face you’ll see at the front desk of Pearly White Dentistry. She joined the practice in 2016. Rylee was born and raised in Hoover, Alabama and now resides in the Birmingham area with her husband, Reid, and her son, West. She attended the University of Alabama and enjoys cheering them on in all sports events.

Have a question about our practice?

Any cookies that may not be particularly necessary for the website to function and is used specifically to collect user personal data via analytics, ads, other embedded contents are termed as non-necessary cookies. It is mandatory to procure user consent prior to running these cookies on your website.